One of the most popular lottery games in the United States is Powerball. Currently played in 44 states, the game has an impressive minimum jackpot of $40 million. Playing the game is easy, and drawings are held twice a week. If you’re interested in winning a huge jackpot, learn more about the game and how to play in this comprehensive guide to Powerball.

How to Play Powerball

When purchasing your Powerball ticket, you’ll first need to select five numbers from 1 through 69. These numbers correspond to the white balls. Next, you’ll select one number from 1 through 26. This number corresponds to the red Powerballs. Your red Powerball number can be the same as one of your white ball numbers. If you do not wish to select your own numbers, you can request a Quick Pick ticket with randomly selected numbers.

Each play slip includes up to five sets of numbers. If you have added the Power Play option to your ticket, you’ll become eligible for additional winnings. The Power Play multiplier is drawn during the regular Powerball drawing and can include a multiplier of two, three, four, five, or 10. However, the 10x multiplier is only used when the jackpot is under $150 million. 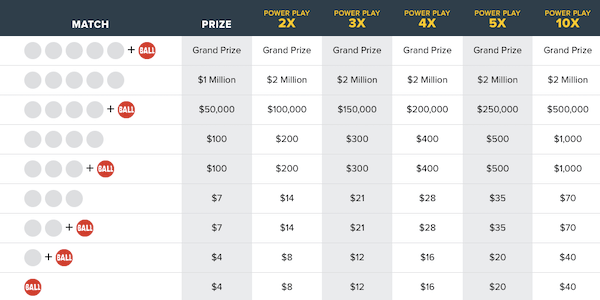 Some jurisdictions also allow for Multi-Draws or Advance Plays where you can buy tickets for consecutive Powerball drawings. To use this option, you’ll need to play the same set of numbers across multiple drawings.

Tickets are sold online and in select stores like petrol stations, convenience stores, and grocery stores. Most state lottery websites offer details about where the nearest Powerball vendors are located.

To play Powerball online, you’ll need to go to your state’s lottery website or a lotto agent such as theLotter or PlayHugeLottos. Look for the list of games, and click on Powerball. From there, you can select your numbers and pay for your ticket. Note that not all lotteries allow the sale of Powerball tickets online.

Most states require players to register on the state lottery website in order to purchase tickets online. Save your ticket purchase confirmation so you can check your numbers during or after the drawing.

Powerball drawings are held every Wednesday and Saturday night at 10:59 p.m. Eastern Standard Time. Typically, Powerball ticket sales stop one or two hours before the drawing begins. These cut-off rules are set by the selling jurisdiction.

A single Powerball ticket costs $2 around 130 INR, and each additional play is $2. If you are adding the Power Play, you must pay an additional $1 per play.

In order to win the jackpot, a player must match the numbers on all five white balls and the red Powerball. Smaller prizes are awarded for those who match some but not all of the balls drawn. If no player wins the jackpot, it continues to grow after each drawing with a minimum rollover of $10 million. Once someone wins the jackpot, it resets for the next drawing.

To date, the largest Powerball jackpot totalled over $1.5 billion. The drawing was held on January 16, 2016. There were three winning tickets, so the winners split the jackpot. Each of the winners opted for the lump sum payment of $327.8 million.

The largest Powerball jackpot for a single winner totaled $758.7 million. The ticket was sold in Chicopee, Massachusetts, in August 2017. There was only one winner, and she selected the lump sum payment of $480.5 million.

One of the most unique Powerball wins involved a large payout without anyone actually winning the jackpot. On March 30, 2005, the Powerball drawing produced 110 second-prize winners. 89 of those winners received $100,000 each. The other 21 winners received $500,000 each since they had added the Power Play option to their tickets. The total payout to the winners was $19.4 million. Another similar payout setup came from popular Mega Millions.

Due to the unusual number of winners, MUSL officials thought that the drawing may have been fraudulent. However, their investigation found that all of the winners had played the selected numbers based on fortune cookies made by the Wonton Food company. Thousands of cookies had the numbers “22, 28, 32, 33, 39, 40” printed on the fortunes inside. The first five numbers matched the Powerball white ball drawing, but the red Powerball was 42 instead of 40.

Keep in mind that the advertised jackpot annuity and cash value are estimates until ticket sales are final. For the annuity option, the MUSL must also take bids on the purchase of securities before finalising the total jackpot.

The tax burden for Powerball winnings depends on the total amount of the prize won. Generally, all lottery winnings over $5,000 are subject to a tax withholding rate of 24 percent. This amount is withheld by the lottery agency to cover the total tax amount you’ll owe depending on your tax bracket. For large jackpots, winners may have to pay a tax rate of 37 percent on winnings of $500,000 or more.

There may also be some state taxes applied to your winnings depending on where you purchased your ticket. Winners of large Powerball jackpots are advised to see a tax expert before claiming their winnings. 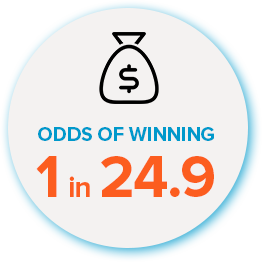 The odds of winning the Powerball only change if the format of the game is altered. For example, when the number of balls from which to choose is increased or decreased, it affects the odds of the game. When Powerball was first introduced in 1992, the odds were much higher: 1 in 54,979,154. However, the jackpots were also considerably smaller and the Power Play was not yet an option, so other prizes were generally much smaller, as well.

Is Powerball Legit or Scam? 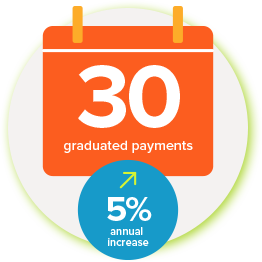 Powerball is a legitimate lottery game. It’s coordinated by the Multi-State Lottery Association (MUSL), a nonprofit organization that has a valid agreement with U.S. lotteries. Make sure you only purchase Powerball tickets from an authorized vendor or an official state lottery website. Tickets purchased elsewhere might not be valid for collecting prize winnings.

There have been some scams — unaffiliated with Powerball — in which individuals have been informed via email, telephone, or social media sites like Facebook that they have won a Powerball prize. Official state lotteries will not contact actual winners in this way. Other indicators that you may be the victim of a scam include being asked for your banking information or for a fee to collect a prize.

Powerball replaced Lotto America, which was the first lottery game offered by the Multi-State Lottery Association (MUSL). The rapid growth of the MUSL’s player base necessitated the switch to a new game. On April 19, 1992, Lotto America was dropped and Powerball made its debut. At that time, Powerball tickets cost $1 each.

Powerball was the first lottery game to utilise two drums during its drawings. The first drum is used to draw five white balls from a total of 69 balls, while the second drum is only used to draw a single red ball from a total of 26 balls. This red ball is referred to as the Powerball and is the inspiration for the game’s name.

In 2001, Powerball introduced the Power Play, an optional multiplier. Players who choose to use the Power Play must spend an extra $1 per ticket. The multiplier number is randomly selected before each drawing to multiply non-jackpot prizes by two, three, four, five, or 10 times.

States were first allowed to offer both Powerball and MegaMillions (the other national U.S. lottery game) in 2010. That same year, Powerball started streaming Powerball drawings online.

A format change was made to the game on January 15, 2012. The changes included an increased ticket price from $1 to $2, an increased minimum jackpot of $40 million, and a decreased number of red Powerballs from 39 to 35. The changes helped to encourage larger jackpots. Within the year, Powerball had its first jackpot totaling over $500 million.

Another format change occurred on October 4, 2015. The number of white balls increased from 59 to 69 and the number of red Powerballs decreased again from 35 to 26. These changes increased the chance of winning any prize but decreased the odds of winning the jackpot. Within three months of the format change, Powerball doubled its previous record with a $1.5 billion jackpot.

Powerball is a fun online lottery game with relatively good odds for winning some type of prize. The odds of winning the jackpot are very slim, but Powerball also has some of the biggest lottery jackpots of all time. Frequent drawings and the option to potentially multiply winnings with the Power Play also make Powerball a popular choice for lottery fans.

Since the jackpot is not won very frequently, it’s also exciting to watch the total grow week by week. Try playing Powerball to see if you can win a prize in this popular U.S. lottery game.

Do I have to be a U.S. citizen or resident to play Powerball?

No. You can play Powerball even if you are not a citizen or resident of the United States as long as you purchase your ticket from a retailer that is licensed or authorized by the selling jurisdiction and you meet the legal age requirements.

Where can I play Powerball?

You can buy Powerball tickets online from India. In US Powerball is offered in 44 states, the District of Columbia, Puerto Rico, and the U.S. Virgin Islands. It is not offered in the following states, which do not sell lottery tickets of any kind:

How old do I have to be to play Powerball?

You must meet the minimum age for gambling in your jurisdiction in order to play Powerball. In most states, the minimum age to buy any type of lottery ticket is 18. Some exceptions include:

How do I claim a Powerball prize?

How long do I have to claim my winnings?