Playwin is an online lottery that is open to residents of Sikkim, India, as well as additional players who wish to play online. This lottery is operated by the state and is promoted by the Essel Group. One of the main restrictions of Playwin is that all players must be at least 18 years of age. Playwin rules also require participants to live in one of the approved states: Goa, West Bengal, Sikkim, Maharashtra, and Arunchala Pradesh.

When you buy a ticket, you will select six numbers. You will fill in those numbers on your ticket that you buy online or from an authorized Playwin retailer. The retailer must process the numbers you choose and give you a proof of purchase in order for the ticket to be valid.

How to Play Online

You can participate in the Playwin lotteries online through the Playwin website. This website offers the opportunity to purchase tickets online. In order to buy tickets online, you must buy a Playwin card. You can buy these cards in denominations of 5,000, 1,000, 500, and 200 rupees. Playwin also allows players to buy tickets by text message with a card.

The cost of a Playwin ticket depends on which draw you are entering. For the Saturday Super Lotto, tickets cost 13 rupees. For the other jackpot draws, the tickets cost either 26 or 78 rupees. The previous cost for the Saturday Super Lotto ticket was 10 rupees, while the other jackpot draw tickets were previously 20 rupees and 60 rupees, respectively. Similar to popular Kerala State Lotteries and Punjab Lottery.

In 2017, Playwin announced a 30 percent price increase on its tickets, partly due to the Goods and Service Tax that charged a 12 percent tax rate to state-run lotteries and a 28 percent tax rate to lotteries operated by private distributors. Some have speculated that the increased tax rate was put into effect to reduce fraud and tax evasion among private lottery operators. Some of the lottery companies operating in various states across India have committed these crimes, which the government is attempting to shut down. 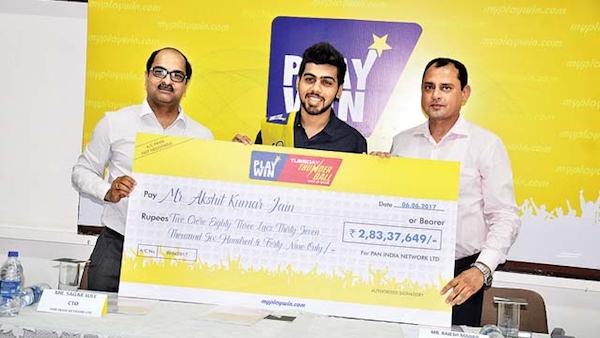 Playwin doesn’t enforce jackpot caps on its lottery games. A previous winner received over 172 billion rupees in a massive jackpot. The minimum jackpot for any draw is 50 rupees, although winners could receive up to 20,000,000 rupees if they select all six of the numbers correctly on their ticket.

The largest jackpot in the history of Playwin came from the Thursday Super Lotto game. This jackpot awarded the winner with 172,900,000 rupees. In 2006, no one claimed a winning jackpot ticket that had a prize of 20,000,000 rupees. Nine years later, another large payout was made to jackpot winners at a grand ceremony at a hotel in Mumbai. At this event, the winners received checks worth over 90,000,000 rupees.

A few of the lucky Playwin winners

Taxes if you win

Anyone who wins a prize in a Playwin lottery draw is responsible for paying the required income taxes on the amount received.

Is Playwin Legit or Scam?

Playwin is a legitimate lottery operated through the state of Sikkim. Those who want to participate have the chance to win big payouts. You must meet all the requirements of Playwin to play, For example, you must be 18 years of age or older and live in a state that doesn’t restrict gambling.

Playwin was established as an online lottery game in November 2001. It was one of the first legal lotteries in India, a country that has heavy restrictions around gambling. In fact, only 13 states in the country allow for legal gambling. Sikkim is one of those states and operates the lottery through Pan India Network Ltd. Playwin also operates in quite a few towns across India. Since it started in 2001, the lottery has awarded more than a million rupees to over 5,000 winners.

With big potential payouts, Playwin is an exciting way to get in on the lottery action in India. Although the ticket prices have recently increased, many people across the nation still enjoy participating in one of India’s largest lotteries. Are you instead of looking for the mega jackpots from Powerball and Mega Millions? Choose one of the recommended lottery agents and play today!

Is it legal to play the Playwin lottery in India?

As long as you live in a state that doesn’t have anti-gambling laws and you meet the requirements, you can participate in Playwin lottery draws. Some of the states in India still restrict gambling, so within those states, you can’t play. However, residents in these states can participate in international lotteries because the draws take place outside of India.