Mega Millions is a United States lottery game organised by the Multi-State Lottery Association (MUSL). It is immensely popular due to its large jackpot size and simple play format. Drawings for Mega Millions are held twice a  week, giving players plenty of chances to win. Plus, every ticket has a one in 24 chance of winning some type of cash prize. If you’re interested in playing Mega Millions, be sure to read through this comprehensive guide to the popular U.S. lottery game.

How to Play Mega Millions

Numbers can be personally selected. To have the numbers randomly selected, players may opt for a Quick Pick play instead.

The cost of each play is $2. In some states, players have the option to pay an additional $1 per play to add the Megaplier, which multiplies non-jackpot prizes by two, three, four, or five, depending on which Megaplier number is drawn. 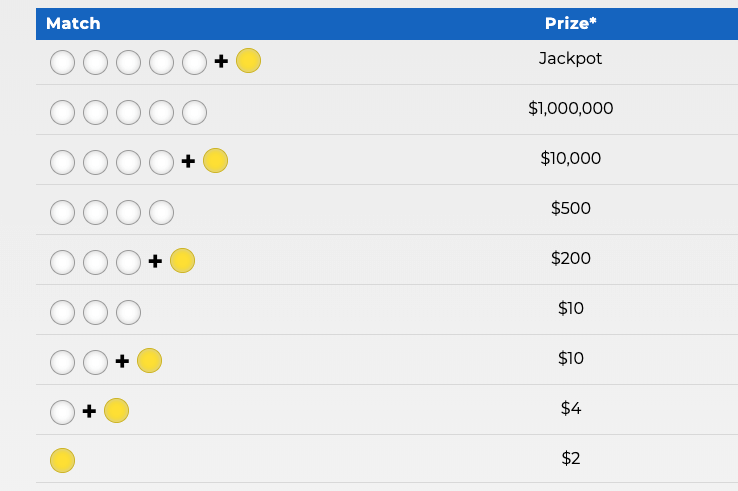 Tickets can be purchased at authorized retailers, which includes many petrol stations, grocery stores, and convenience stores.

Easiest to way to play Mega Millions from India is to register at one of the lotto agents in the list below. If you are in some states in US, Mega Millions plays can as well be purchased online at official state lottery websites. Players in these states can register on the site, select their numbers, and  pay using an online lotteries portal. The following states offer the purchase of Mega Millions tickets online as of March 2019: Georgia, Illinois, Kentucky, Michigan, New Hampshire, North Carolina and North Dakota.

Drawings for Mega Millions are held on Tuesday and Friday nights at 11:00 p.m. Eastern Standard Time. Most drawings are held at the studios of WSB-TV in Atlanta, Georgia. For especially large jackpots, some of the drawings have been held in special locations, such as Times Square.

Each Mega Millions play costs $2 around 130 INR. In some states, players have the option to add the Megaplier for an additional $1 per play.

Some states also offer a Just the Jackpot option, which includes two plays for $3 with no eligibility for non-jackpot prizes.

The jackpot for Mega Millions is frequently the largest lottery jackpot in the United States. The size of the jackpot continues to grow after every drawing if a winning ticket has not been purchased. The advertised jackpot amount is based on the annuity payout option rather than the lump sum option (see Payout Options below for more details).

If there is more than one winning ticket for a single drawing, the jackpot is divided equally among the winners. For all other prizes, the winnings are a fixed amount that is paid in full to each winner.

The minimum jackpot for Mega Millions is $40 million. The jackpot continues to increase until someone has a winning ticket that matches all six numbers drawn. After that, the jackpot is reset to $40 million for the next drawing.

There is no jackpot cap for Mega Millions. The jackpot size will continue to grow until a winning ticket has been purchased.

The largest Mega Millions jackpot totaled $1.537 billion. The ticket was purchased in South Carolina, and the drawing was held on October 23, 2018. However, the winner did not come forward until March 2019 to claim her prize. She chose to do so anonymously and had taken the time since the win to hire a team with experience in handling large jackpot prizes. She selected the cash option for a one-time payment of $877,784,124, making it the largest lottery jackpot payout to a single winner in U.S. history. 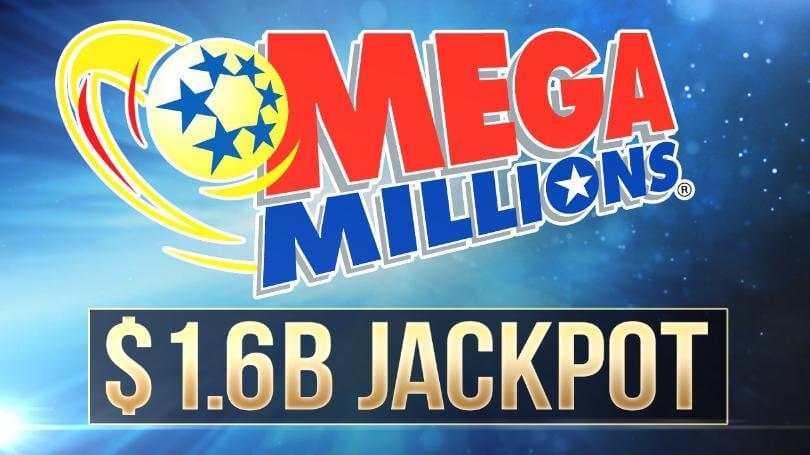 Over $ 1.6 BILLION Jackpot on Mega MIllions

The second-largest Mega Millions jackpot was valued at $656 million and was drawn on March 30, 2012. There were three winning tickets sold. In Illinois, winning couple Merle and Patricia Butler claimed $218.6 million of the winnings. The same amount was claimed by each of the winners in Maryland and Kansas, both of whom chose to remain anonymous.

The third-largest Mega Millions jackpot was valued at $648 million and was drawn on December 17, 2013. There were two winning tickets sold. Ira Curry of Georgia and Steve Tran of California both selected the lump sum option of $173 million each.

There are two ways to claim the winnings for the Mega Millions jackpot:

All Mega Millions prizes are subject to income tax. The larger the prize, the bigger the potential tax burden may be. Most lottery winnings over $5,000 have an automatic 24 percent tax rate withheld by the lottery agency in order to cover the estimated taxes owed. For winnings of $500,000 or more, you may need to pay additional taxes at 37 percent to account for entering the top income bracket. Some states also apply taxes to lottery winnings.

If you win a large lottery prize, it may help to consult a tax expert before you claim your winnings. These professionals can help you navigate the complicated income taxes applied to this type of prize.

The odds of winning the Mega Millions jackpot is 1 in 302,575,350. In order to win this prize, you must match all five white balls and one gold MegaBall. This game has fixed odds based on the probability of matching all six balls. That means that your chance to win the jackpot does not change based on the jackpot amount or how many people buy tickets for that drawing. 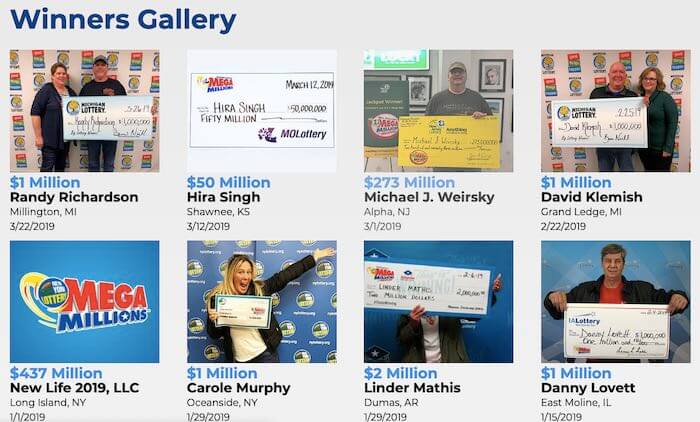 A few of all the Mega Million winners!

The odds for winning other Mega Millions prizes are as follows:

These prize odds are also fixed. However, changes to the game have resulted in varying odds over the years. For instance, when the Mega Millions format was changed in October 2017, the odds of winning the jackpot decreased from 1 in 258,890,850 to 1 in 302,575,350. However, it’s worth noting that these format changes also increased the potential jackpot size.

Is Mega Millions Legit or Scam? 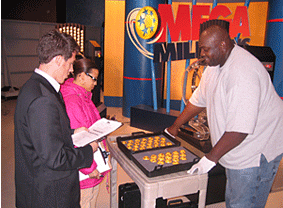 Mega Millions is a legitimate lottery game. All tickets which are legally purchased from a licensed or authorizer retailer will be eligible to collect winnings if they match the specified numbers from the drawings.

However, there are reports of some scams that are unaffiliated with Mega Millions. In 2005, for example, there was a large-scale mailing scam in which individuals received a letter with the Mega Millions logo. The letter included a check for unclaimed winnings. Unfortunately, these checks bounced and banks stamped routing numbers and other personal account information on the checks before returning them to the fraudulent company that originally sent them out. This scam caused many people to have their financial information stolen.

Other scams involve contacting people by email, phone, or through social media sites. The scammers often use an official-sounding name like “United States National Lottery” or “Mega Millions Mobile Lottery.” To avoid a scam, never send any money or personal details to anyone who says that you have unclaimed lottery winnings.

In 2010, the MUSL formed an agreement that allowed for the sale of both Mega Millions and Powerball (the other largest U.S. lottery game) at authorized retailers. Prior to this agreement, states were only allowed to participate in one of the games, and only retailers on the border between states could sell both types of tickets. This led to the addition of many new states to the Mega Millions game. 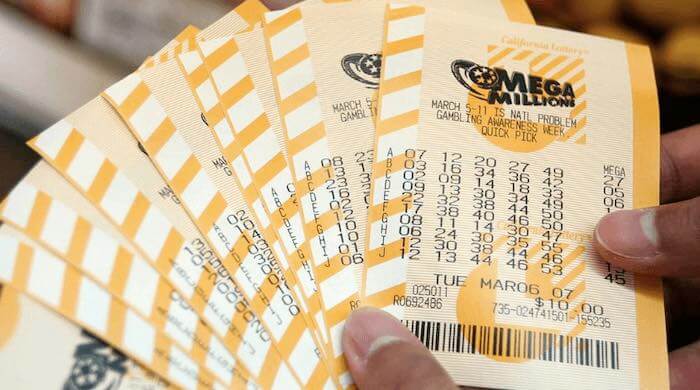 In January 2011, Mega Millions introduced the Megaplier to the game. Players who choose this option pay an additional $1 per play and are eligible to have non-jackpot prizes multiplied by two, three, four, or five, depending on what multiplier number is drawn.

In October 2017, a few more changes were made to the Mega Millions game format. Most notably, the price of a single play doubled to $2. In addition, the number of white balls decreased from 75 to 70, and the number of gold MegaBalls increased from 15 to 25. The minimum jackpot was also set to $40 million with a minimum rollover of $5 million between drawings.

Another big change occurred in October 2017: the Just the Jackpot option was added. This option allows states to choose whether players could purchase a two-game play for $3. Just the Jackpot plays are only eligible for the jackpot and cannot be used to win any of the lower-tier prizes. The following states offer the Just the Jackpot option as of March 2019: Georgia, Indiana, Kansas, Kentucky, Massachusetts, Nebraska, New Jersey, New Mexico, New York, Ohio, South Dakota, Texas, Virginia, Wisconsin, and Wyoming.

Mega Millions is an exciting lottery game with good odds for winning some type of prize. It also offers some of the largest lottery jackpots available. At just $2 per play, Mega Millions is a great game for those who want to make a small bet with a huge potential payoff. There are a few different lotto agents that offer Mega Millions, you can find them under online lottery reviews or click on the agents here: PlayHugeLottos, Lotto247, Multilotto and LottoKings.

Where can I play Mega Millions?

Currently, Mega Millions is available in 44 states, Washington D.C., and the US Virgin Islands. The following states do participate in Mega Millions:

Do I have to live in the U.S. to play Mega Millions?

There are no residency requirements to play or win Mega Millions. Non-citizens and non-residents can play as long as they purchase a ticket from an authorized retailer or website.

What are the age restrictions for playing Mega Millions?

To play Mega Millions, you must meet the age requirements for gambling in your state or jurisdiction. Most states require individuals to be 18 years or older in order to buy any type of lottery ticket. Some exceptions include:

How long do I have to claim my prize?

The length of time allowed to claim lottery winnings is determined by each individual jurisdiction. It may vary from around 90 days to one year depending on where the winning ticket was purchased.

How do I claim my Mega Millions winnings?

Sign the back of your ticket and turn it into an authorized retailer in your state to collect your prize. For larger prizes, you may need to visit your state’s lottery offices to claim your winnings.