The Kerala State Lottery is one of the easiest to play. Simply buy a ticket or a book of tickets from an authorised seller and you could win! Each ticket has a random combination of numbers and letters on it. If your combination comes up in the draw, then you’re a winner. Only one ticket can win the largest jackpot, but players could win one of many smaller prizes.

How to Play Online

Best online lottery websites and sellers can help players get involved via their smartphones, tablets, and computers. There are a variety of different online lottery sites. Some post physical tickets to you using courier or speed post, while others link your ticket numbers to an online account. Just as it’s important to buy from an authorised offline seller, also take care of buying from online outlets. While there are some credible online lottery agents, there are also scammers who can prey on people seeking their fortunes.

The Kerala State Lotteries’ regular jackpots vary according to the day of the week. The Tuesday, Wednesday, and Friday draws have the smallest jackpots of Rs 60 lakhs. The Monday draws can be slightly more lucrative with a jackpot prize of Rs 65 lakhs. On Sundays, Kerala State Lotteries has a jackpot prize of Rs 70 lakhs. Thursdays and Saturdays are the richest draws with jackpots of Rs 80 lakhs.

Kerala State Lotteries bumper draws are population for their larger than average jackpots. The top prizes vary, but range from Rs 3 crore to Rs 7 crore. Do you want to become a billionaire? Try out the international lotteries such as Powerball and Mega Millions!

Kerala State Lotteries has set jackpots for its draws, rather than climbing jackpots as some other lottery games do. This means it doesn’t really have minimum jackpots or jackpot caps. The highest jackpot for each of the daily draw remains stable week to week, although Kerala State Lotteries increases its prizes throughout time to keep pace with player expectations.
Since bumper lottery draws are less frequent, the jackpot prizes may vary from year to year. However, modern bumper draws always have large jackpot prizes worth several rupees crores.

Kerala State Lotteries jackpots have the power to change lives. No one proves that more than Mojiful Rahima Sheikh, a poor young father from West Bengal. He moved to Kerala where he found work on a construction site. He made just Rs 50 a day, but found himself moved by a local lottery vendor selling tickets to survive. He decided to help the man by spending his entire daily earnings on lottery tickets. His good karma was rewarded when his lottery ticket won the Rs 1 crore summer bumper jackpot in March 2016.

An automobile shop worker identified only as Ganesh from Palakkad got lucky when he won the Rs 8 crore jackpot in October 2016’s Thiruvonam bumper lottery draw. He was so busy working that he couldn’t even check his ticket for two weeks after the draw. Thankfully he presented it at the bank before the lottery deadline. Hopefully his win allowed him to take a well-earned vacation! If you are looking to win the biggest jackpots we recommend to check out Lotto247 and theLotter lottery reviews.

Cash is the most common payout option for small lottery prizes. Large prizes are usually deposited directly into the winners’ nominated bank accounts. Cheques may also be used for large prize payouts.

Tax is immediately deducted from Kerala State Lotteries prizes greater than Rs 10,000. You may pay more tax if you win several prizes during the year or have a high income. Declare your winnings as “income from other sources” when you’re preparing your tax claim to ensure you’re paying the right amount.

The odds of winning the jackpot or second tier prize are quite small, at around 1 in 108,000,000. However, just one ticket can win each of these prizes. As the Kerala State Lotteries awards 12 third-tier prizes, the odds of securing one of these prizes are much better at approximately 1 in 9,000,000. This trend continues to the eighth tier. With odds of around 1 in 119, you have the best chance of winning this prize.

Is Kerala State Legit or a Scam?

Kerala State Lotteries is regarded as one of the most reputable lotteries in India. The lottery body prides itself on its transparent operations and reliable delivery. 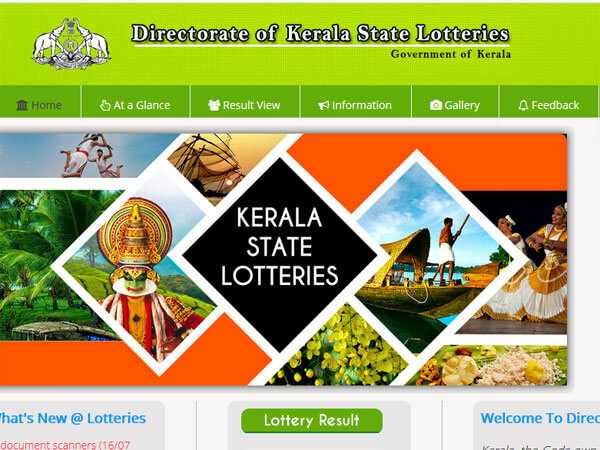 The Government of Kerala oversees the printing and distribution of all lottery Kerala State Lotteries tickets. The government maintains control by printing all tickets on its own printing presses. Each lottery ticket has a barcode and random number assigned to ensure the draw is always fair and credible.

The Government of Kerala established Kerala State Lotteries in September, 1967, shortly after the Government of India banned private lotteries. The lottery department was the brainchild of former state finance minister P. K. Kunju Sahib. He felt a state-based lottery would create exciting new employment opportunities within Kerala and boost the government’s financial resources, without alienating members of the public.

The new Kerala State Lottery became the blueprint for similar state-based lottery programs across India. With the late Shri P. K. Seydu Mohammed at the helm, the first tickets were sold in November, 1967. For just a single rupee, players could win Rs. 50 lakhs. The first prize draw occurred on January 26, 1968.

Since its inception, Kerala State Lotteries has become one of the largest and most popular state-based lotteries in India. Its Thiruvananthapuram headquarters employs approximately 465 workers. In addition, Kerala State Lotteries has 14 district offices and a regional deputy directorate. While initially part of Kerala’s Department of Finance, it is now a key part of Kerala’s Taxes Department.

Kerala State Lotteries is one of the fairest and most credible lotteries in India. With money from the lottery benefiting the sellers, who are often poor, and the state, players can feel good about injecting their money into this program. The potential for winning great prizes is another powerful incentive!

Question: Where can I buy tickets for the Kerala State Lotteries draws?

Answer: Kerala State Lotteries tickets are available through the Taluk Lottery offices. You can find these at specialised lottery retailers and lottery booths, along with bus stands, metro stations, and railway stations. Look for the retailer or lottery dealer’s stamp on the back of the tickets for authenticity. With more than 35,000 lottery agents and 100,000 lottery retailers, finding somewhere to buy Kerala State Lotteries tickets is easy.

Question: How many tickets are in a lottery ticket book?

Question: What should I do after buying a Kerala State Lotteries ticket?

Answer: The Kerala State Lotteries department encourages all players to write their name, address, and signature on the back of their lottery ticket. Once you’ve done that, keep your ticket in a safe place and wait for the draw. Hopefully luck will be on your side!

Question: What are the daily Kerala State Lotteries draws called?

Answer: Kerala State Lotteries has a special name for the draws corresponding to each day of the week. The working week commences with the Win-Win draw on Monday afternoons. There’s the Sthree Sakhi draw on Tuesdays, the Akshaya draw on Wednesdays, and the Karunya Plus draw on Thursdays. The final draw of the work week is Nirmal on Fridays. The weekend brings Karunya on Saturdays and Pournami on Sundays.

Answer: Kerala State Lotteries has six bumper lottery draws throughout the year for public holidays and seasonal celebrations. You can expect bumper draws for the monsoon and summer seasons, Thiruvonum celebrations during Onam, Pooja, the Hindu New Year festival Vishu, and Christmas-New Year. Kerala State Lotteries may also hold additional bumper lottery draws, as it did in October 2018 to raise funds for flood relief.

Question: Where are the Kerala State Lotteries draws conducted?

Answer: All Kerala State lottery draws are conducted at Sree Chithira Home Auditorium in Thiruvananthapuram. Guests are welcome to attend the draw and see how the lottery is conducted first-hand.

Answer: The official Kerala State Lotteries website is usually the first channel to publish the lottery results. They’re also published in the Kerala Government Gazette and other leading daily newspapers the next day. The Government of Kerala also posts the lottery results on its website. You may also see the Kerala State Lotteries draw results published on local news websites, lottery websites, and other offline channels. In addition, you can simply ask staff at the place you bought your lottery ticket whether it is a winner.

Question: How long do I have to claim a prize in the Kerala State Lottery?

Answer: All prizes should be claimed within 30 days of the winning draw. This deadline is much shorter than in many Indian states, but it helps the Kerala State Lottery operate efficiently. If you struggle to claim winnings in time, you may like to play online. Some online lottery websites check your numbers and claim any winnings for you automatically, so you never have to worry about redeeming them in time.

Question: My ticket is damaged. What happens now?

Answer: The Government of Kerala will not accept damaged tickets. You should always keep your ticket in a safe place so it’s in mint condition if you win.

Question: How do I claim a Kerala State Lotteries prize?

Answer: Visit any district lottery office or bank to claim your prize. If you have a small prize up to Rs 1 lakh, simply produce your winning ticket.

If your prize is larger, present your winning ticket, a lottery claim application, a self-attested copy of both sides of your ticket, two personal passport photos attested by a gazetted officer or notary, a self-attested copy of the PAN card, an attested identity document, such as a driver’s license or passport, and a receipt for the prize money with a Rs 1 revenue stamp and your address. If you’re a minor, you’ll need a guardianship certificate as well. If you’ve won the prize with someone else, you should include a joint declaration in stamp paper valued at Rs 50.

The district lottery will immediately process any prize up to Rs 1 lakh. Prizes between Rs. 1 lakh and Rs 20 lakh must be processed by the Kerala State Lotteries’ deputy director. The organisation’s director processes prizes greater than Rs 20 lakhs. Your district lottery office representative can pass your winning lottery ticket and documents on to Kerala State Lotteries officials.